Specifically, ZFC is a collection of approximately 9 axioms (depending on convention and precise formulation) that, taken together, define the core of mathematics through the usage of set theory. More formally, ZFC is a predicate logic equipped with a binary relation ∈, which refers to set membership and is read as "in". To be clear, it is said that a∈b when a is an element of b.

In general, statements in set theory are expressed using first-order logic, which uses a number of quantifiers (or logical symbols):

This allows for the axioms in ZFC to be stated succinctly using symbols, as in the following section.

The axioms of ZFC can be stated in several equivalent ways, and have slightly different names and logical formulations depending on the source. Of course, each individual source will have a rigorous correct treatment of the axioms, one of which follows:

In other words, if for all , then . In plain language, this statement is equivalent to "If two sets have the same elements, they are the same set."

where denotes the logical or quantifier.

where is the logical and quantifier, and is an arbitrary property.

Axiom of comprehension: the elements of satisfying form a new set

In plain language, this statement is equivalent to "Given any property and set , there exists a set containing all elements of that satisfy ." In informal terms, a subset of a set can be constructed by a succinct rule; e.g. the rule " even" applied to the set of integers results in a new set.

where is the logical and qualifier.

In other words, for any set , there exists a set whose elements are subsets of . In plain language, this axiom states that the power set of exists.

If is any function, then for any set there exists a set . The statement in logical quantifiers is more complex. 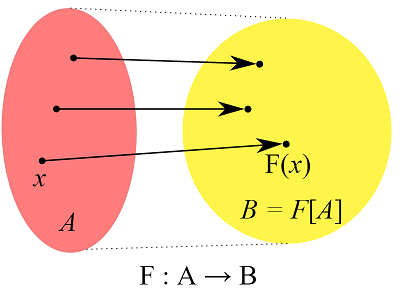 A function takes any set to a new set

In other words, for all non-empty sets , there exists an element of that is disjoint with (shares no elements with ). This has two major consequences:

These 8 axioms define a consistent theory, ZF (though, of course, it is very difficult to prove that this system is consistent). When the axiom of choice is added to the eight axioms above, the theory becomes ZFC (the "C" for choice), and it is this system that is commonly used as the foundation of mathematics.